Long-Form Blog Post: What you can do about the refugee crisis 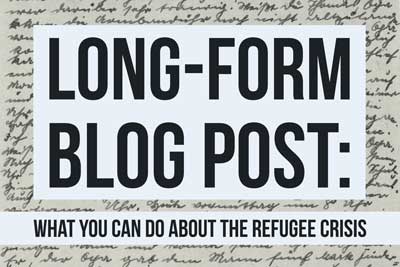 What you can do about the refugee crisis

According to UNHCR’s 2015 Mid-Year Trends Report, “the global refugee total, which a year ago was 19.5 million, had as of mid-2015 passed the 20 million threshold (20.2 million) for the first time since 1992. Asylum applications meanwhile were up 78 percent (993,600) over the same period in 2014. And the numbers of internally displaced people jumped by around 2 million to an estimated 34 million.

Indications from the first half of the year suggest 2015 is on track to see worldwide forced displacement exceeding 60 million for the first time. In a global context, that means that one person in every 122 has been forced to flee their home.” (Source: UNHCR)

How do you even wrap your brain around such a crisis?

For a good overview on the refugee crisis, check out John Oliver’s Last Week Tonight segment, Migrants and Refugees:

So who is tasked with dealing with this crisis? UNHCR (The United Nations High Commission for Refugees) is the UN’s refugee agency, “mandated to lead and co-ordinate international action to protect refugees and resolve refugee problems worldwide.” Those large camps you may have seen on TV with rows and rows of white tents that are set up as temporary shelters for refugees? Those are UNHCR camps. They’re on the front lines of this global crisis.

From Portsmouth, NH to TEDGlobal>Geneva & UNHCR

I traveled from my hometown of Portsmouth, NH to visit UNHCR earlier this month as part of my 3-day experience with TEDGlobal>Geneva, which I was attending on behalf of TEDxPiscataquaRiver.

After the Paris attacks happened, the global conversation around refugees, and particularly the influx of Syrian refugees, was suddenly turned up to full volume. The situation in Europe had reached crisis level by mid-2015, but the US really started paying extra attention after Paris was hit with several attacks on November 13th.

It was for this reason that my UNHCR visit and meeting with Melissa Fleming was the single part of the trip that I was anticipating the most. This was what everyone was talking about now, and I was about to get the chance to hear about this crisis from the people who spent every day working on it, spent every day trying to help these refugees.

The second day of TEDGlobal>Geneva’s TEDx organizer workshops started with a morning session for the full group of 500 TEDx organizers from all over the world, and transitioned into our breakout activities. The last speaker of the morning session in front of the whole group was Melissa Fleming. Before she took the stage, they played her most recent TED talk — this one:

Melissa Fleming: A boat carrying 500 refugees sunk at sea. The story of 2 survivors

After the screening of this powerful talk, Melissa Fleming took some questions from the host about the state of the crisis since her talk, and in Europe overall as more and more countries were taking positions on whether or not to accept refugees. She mentioned that the US was the most extreme country in terms of their reaction to the refugee crisis. This was incredibly disheartening to hear. But it also more than anything fueled my desire to learn what WE could do to help — and to bring that infor 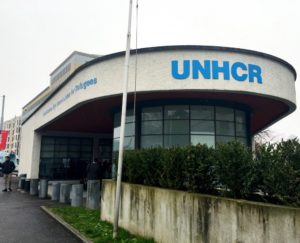 mation back to Portsmouth so that we could counteract the misinformation with practical, helpful action.

I was grateful to be part of the group of 30 or so TEDx-ers who were going to UNHCR for our breakout afternoon. We headed over to UNHCR’s headquarters, for a brief tour followed by a more intimate conversation that took place in a conference room of the UNHCR Geneva headquarters.

We stopped by the memorial on our way into the main building, where our guide explained UNHCR staff would come occasionally to honor the memories of their colleagues who were killed on the job. It was difficult to acknowledge that this even happens — that neutral people who are there solely to help people get attacked and killed. 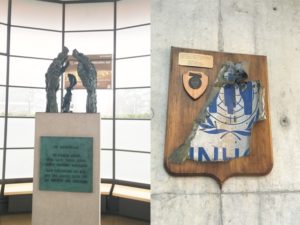 It’s a risk that I hadn’t previously thought about coming along with a job as a humanitarian. We also saw other memorials, like a remnant of a UNHCR plane that was blown up.

Once we got to the conference room, we heard more about the challenges the world is facing from a refugee point of view, and we heard it from the organization tasked on a global level with helping them. And I got to meet Melissa and ask what we can do in the US against the massive fear-based rhetoric that’s currently going around about Syrian refugees.

While the US might be the most extreme in its public spread of misinformation (conveniently polarizing the public in order to rally political support before a big election season), this xenophobic response happens all over the world in reaction to an influx of refugees — fear is a normal human reaction, even when it’s not particularly rational.

The best way to counteract this misinformation and irrational fear is with facts.

The Process for Refugee Entry to the US

It’s the hardest status to get as a visitor or emigrated to the US. So if a nefarious person wanted to get into the US, there are many other ways — literally EVERY other way — that would be much easier than going through the refugee screening process.

Last year, Turkey accepted 1.9 million refugees (1.7 million from Syria). Lebanon accepted 1.8 million (nearly all Syrian). Jordan accepted 1 million (over 937,000 Syrian). Germany is on track to accept 1.5 million this year, due to its recent campaign to welcome Syrian refugees with open arms — and even applause.

Okay, so it’s highly improbable and nearly impossible for a refugee fleeing harm in the Middle East or Africa to get into the US, so, sadly, if you live in Portsmouth, New Hampshire, you cannot personally open your home to refugees in need.

So what can you do to help?

This was the underlying thread of nearly every question that was raised in our discussion following Melissa Fleming’s presentation in the UNCHR conference room. Our group of about 30 represented around 20 countries, from Italy to India to Japan. As TEDx organizers and as citizens of each of our countries, what could we do to help?

As organizers of community events like TEDx, there were several helpful things that we could do to include refugees and refugee stories in our events. But as citizens in our communities across the globe, what could we do?

The most direct way to help refugees and support the work being done by UNHCR is to contribute monetarily by donating to UNHCR. UNHCR has proven solutions and plans in place, just ready to be deployed — but with yearly increase in refugees that need help, particularly this year which has seen a massive spike in refugees and displaced persons, the funding is far below what is needed to effectively help all refugees. UNHCR relies on funding from countries all over the globe to help manage and help refugees and displaced persons. As of the time of my visit on December 7th, they were running at about 50–60% funded for 2015, based on the budget they would need to successfully care for and/or house (even temporarily) the number of refugees worldwide. They are shouldering this responsibility on behalf of the entire world — so donating to the UNHCR is one way to help. 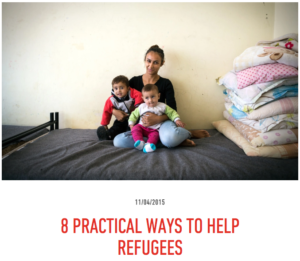 Other ways to help, which will vary in possibility depending on what country you live in, are listed in Melissa Fleming’s recent post on TED.com, 8 practical ways to help Refugees.

One of the things suggested here is to help refugees integrate into a new community.

Help refugees integrate into a new community here at home

Check out a local refugee organization in your area. Here in New Hampshire, you can contact ORIS (Organization for Refugee and Immigrant Success) in Manchester, NH. Volunteer some time with them, or simply ask them how you can get involved with your state’s refugee population. The more we see refugees as part of our community once they get here, the more open we will become to bringing them here in the first place.

Keep learning about what is happening and you’ll keep finding ways that you can help. Take an hour to listen to this great documentary on the crisis on BBC: The Year of Migration. 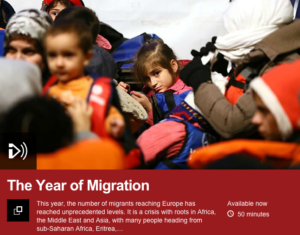 If you don’t have an hour right now, bookmark that one for later and watch this 20-minute chat that I got to see in Geneva. It’s an interview on the TEDGlobal>Geneva stage between host Bruno Guissani and UNHCR Commissioner (who is retiring today), António Guterres:

António Guterres: Refugees have the right to be protected

Your hometown might be far enough removed from this crisis that it’s easy to forget about the thousands of people dying just across the ocean.

Make a commitment, do the work to learn about what is happening, to at least try to wrap your head around the massive challenges that refugees are facing, by the millions, as we go into 2016 seeing the largest number of refugees and displaced persons in history. Read their stories. And if you find a way to help, share it with others.

At the time I’m posting this article, it is New Year’s Eve, and in lieu of going out to celebrate, I’m donating a bar tab’s equivalent to UNHCR. It won’t be a very happy new year for millions of people. But we all have the capacity to make it a little bit better, even if it’s just one person at a time.